Former Head Boy, James Roque has been performing in the play – “Call of the Sparrows” Here is the transcript from an interview with graduating actors Chye-Ling Huang and James.
Hollywood is seeing an evident lack of Asian representation in its theatre and screen but Asian New Zealanders, and Unitec Acting grads, Chye-Ling Huang and James Roque of Proudly Asian Theatre (PAT) are making sure that Asian Kiwis have their voices heard loud and clear. The two are currently busy with their latest offering, Call of the Sparrows, playing at The Herald Theatre but Unitec Student Media managed to get hold of them for a quick chat.

Hi, Chye-Ling and James. Can you tell us a little bit about yourselves?
Chye-Ling: I am a Chinese-Pakeha New Zealander, my dad is from Malaysia and my mum is from Christchurch. I studied acting at Unitec and have been working as an actor, puppeteer and theatre maker since.
James: I graduated from Unitec’s acting degree in 2012 with Chye-Ling. Apart from being a theatre maker, I’m also a comedian, writer and actor. I moved to New Zealand in 1999 at the age of 8 from the Philippines, and have grown up in Auckland since.

Both of you graduated from Unitec. Can you tell us about your favourite project as a student and why it sticks the most for you?
James: I reckon my favourite project would have to be a our Third Year production of Titus. It was a pleasure working with Ben Henson and the rest of the boys. I think we made a pretty special piece of theatre during that project.
Chye-Ling: A project that really stuck with me is our community plays, led by Pedro Ilgenfritz, where we had to go out into a community, do research, and interview the people about their stories and devise a show that reflected them with a budget of about $100. It forced me to think deeply about why I want to make theatre and what it can really do to represent people. It also allowed me to start thinking about the possibility of self-driven, self-created work that was valuable after I graduated.

Any individual or group of people that inspired each of you to take up acting?
Chye-Ling: A show called The Hermitude of being Angus, Ecstatic really affirmed that the kind of theatre I want to make is out there, valid, and people are so ready to get behind it. My drama teacher and good friend Paul Willis was a big influence and has supported me immensely.
James: Not really. I’ve always been fascinated with performance and the relationship between the audience and the performer. I reckon I have my mum to thank for always making me read the bible readings in front of everyone at church when I was a kid.

PAT has recently changed its name from Pretty Asian Theatre to Proudly Asian Theatre. Thank you so much for making the change and giving Asian New Zealanders a strong voice in theatre and film.
James: We think it’s super important to do this.

How does Call of the Sparrows align with your company’s new mission?
Chye-Ling: Our mission is to support Asian artists in telling their stories. This whole season has been built around providing opportunities for Asian creatives to learn, grow, and hone their craft. I wrote the play, James is directing, we have an all-Asian New Zealanders in all the key roles, and thanks to CNZ and Foundation North, they are all paid professional wages. It’s really satisfying!
James: Call of the Sparrows is our first original project made from scratch. It is written and conceived entirely in house and we’ve used it as a way to employ or give other Asian practitioners a platform to express themselves creatively, whether through performance or technical design. The overall themes of the play – old world vs new world, what do we hold on to form our past? – also resonate with what it means to be a modern Asian individual here in NZ.

Where and how did the Call of the Sparrows started?
Chye-Ling: A couple of years ago, we had the urge to make an original play. We realised that our tastes were unique in New Zealand and that we needed to make the kind of work we wanted to see. One thing we had in common was family stories from our Asian parents, which grew into a fictional world based on these elements.

There’s been a huge tension in Hollywood with its lack of Asian American representation. Do you think the same thing is happening here in New Zealand?
James: Yes I do. I think there is a huge lack of representation of Asian people, onstage and onscreen, here in New Zealand. I think it’s absolutely absurd that there isn’t a single Filipino nurse on Shortland Street. It’s crazy! Go to any hospital here in Auckland and I guarantee you, you will meet at least 3 Filipino nurses in the first ten minutes of being there. There are people who are actively working against that, Flat3 comes to mind, but I reckon we’ve got a long way to go.
Chye-Ling: For me, I see more awareness in the theatre community. But again, I’m in a lovely bubble of friends and supporters which can give a false sense of things changing. I’m still seeing theatre shows that have all-white casts and TV series centered around a white family with Asians as sideline, one dimensional characters. At the same time, there are hopeful moments. The team behind Flat3 are prolific as ever. The Diversity Project Fund was created last year. I’m definitely more vocal about inclusive casting than I’ve ever been and we have a long way to go before things begin to even out.

Congratulations on bringing Call of the Sparrows from paper to stage. We’re looking forward on seeing it this weekend! The show is still on-going but have you already thought of your next projects?
Chye-Ling: We are hoping for a chance to redevelop and tour the show. There are also a few Singaporean scripts I would love to stage in NZ.
James: We’ve got some things in mind. You’ll have to subscribe to our newsletter to find out!

The link to the interview is below.
http://unitecstudentmedia.co.nz/?p=1324 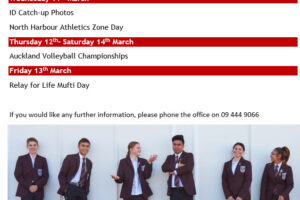 The school’s hip hop group performed to a very appreciative[...]